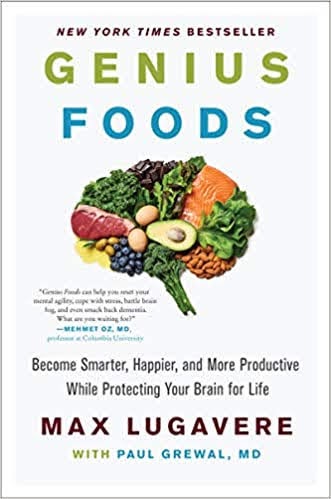 Here are 10 books on running and health that I’ve read recently that I would highly recommend:

26 Marathons by Meb Keflezighi: Each chapter covers one of the 26 marathons that Meb raced competitively, and the lessons he learned from it. He was remarkably consistent, over a long period of time.

Oxygen Advantage by Patrick McKeown: I was recommended this one a week before my VO2 max test.

Top takeaways: Practice nasal breathing and breath holds! I learned about your BOLT score, which measures how long you can hold your breathe and how that affects you in every aspect of life.

Tip: Tape your mouth shut while sleeping for a period of time to induce nasal breathing during sleep.

Genius Foods by Max Lugavere: My top nutrition recommendation – such a wealth of information in this one on how diet contributes to brain health.

Tip: Consume more extra virgin olive oil and stay away from canola oil, grape seed oil, and grain oils. Understand the smoke point of the oils you are cooking with as well.

Food: What the Heck Should I Eat by Mark Hyman: Mark Hyman is an advocate of functional medicine. Mark Hyman refers to this as “systems biology”, which differentiates itself from the current practice of specialization (neurology, cardiology, etc.) and looks at the body as a whole – looking at things like the brain/gut connection, the impact of environment on the expression of genes, etc. This approach differs from the current “diagnose and adios” model.

Obesity Code by Jason Fung: Dr. Jason Fung breaks down why weight gain is a hormonal imbalance, not a caloric imbalance. In short, I like to think of insulin and cortisol as being directly related to weight, while ghrelin (hunger hormone) and leptin (satiety hormone) are closely correlated with weight (but what calorie counters like to think of as “willpower”). While calories are a literal formula to determine overall weight gain/loss, the human body is ever changing in response to its environment and one big assumption that gets missed is RMR (resting metabolic rate) being constant. In the absence of a proper diet, a caloric deficit gets made up for by the body burning less calories by shutting down the immune system, body temperature regulation, and other necessary functions. Jason Fung argues that we need to focus more energy on a person’s “body set weight”, which is their weight at homeostasis. If I were to translate this to a strict calorie counter, I would argue for maximizing RMR, that is, making sure that the body is optimally burning calories at rest, rather than focusing on minimizing calorie intake.

The UltraMind Solution: The Simple Way to Defeat Depression, Overcome Anxiety, and Sharpen Your Mind by Mark Hyman: Mark Hyman connects nutrition and environmental factors with mental health. He has since produced a docuseries “Broken Brain” and “Broken Brain 2” further investigating the topic.

Ultrametabolism: The Simple Plan for Automatic Weight Loss by Mark Hyman: Mark Hyman was already writing about Nutrigenomics back in 2006.

Example: Or take the recent study in which Finnish researchers gave two groups of people with metabolic syndrome, or prediabetes, a slightly different diet. For 12 weeks, each group ate the same number of calories and the same amount of fat, protein, carbohydrates and fiber. The only difference? The first group had wheat, oat and potatoes as its carb source, and the second group had rye — which has very special properties because the body slowly absorbs it, and its phytonutrients help you lose weight and improve metabolism.
So what happened? The wheat, oat and potatoes diet activated 62 genes that increased inflammation and oxidative stress, worsened the blood-sugar balance, and generally amplified all the forces in the body that can lead to obesity, heart disease, cancer, diabetes and Alzheimer’s disease.
It was a 100 percent effect: No good genes were turned on. The rye diet, on the other hand, activated 71 genes that prevent diabetes, lower cholesterol, reduce inflammation and improve blood-sugar control — a 100 percent good gene effect.
Just imagine: If there were a drug that could turn off all the disease-promoting genes and turn on all the health-promoting, anti-aging genes, it would be a blockbuster. But you don’t see ads on television telling you to eat more whole-kernel rye bread!

Primal Endurance: Escape chronic cardio and carbohydrate dependency and become a fat burning beast! by Mark Sisson: Mark Sisson is a former endurance athlete that touches on many of the topics above.

Finding Ultra: Rejecting Middle Age, Becoming One of the World’s Fittest Men, and Discovering Myself: Recommended by my trainer, Seth, before I ran my first marathon. Follows vegan ultra-athlete Rich Roll on his journey from barely being able to walk up his stairs to the ulra marathon championships in Kona.

Eat & Run: My Unlikely Journey to Ultramarathon Greatness: Vegan (and during one phase, completely raw diet) ultra-athlete Scott Jurek’s story of his races. The first book that got me into running was “Born to Run” by Christopher McDougall, a book highlighting the Taramuhara ultra runners – so it was interesting to hear Scott’s recollection of that same race, from his perspective, coming in second to Arnulfo.